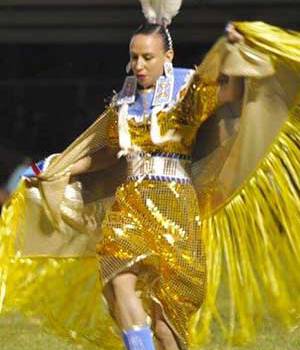 Bobbi Lynn Frederick is from the Crow Creek Sioux Tribe in Fort Thompson, South Dakota. She was raised on the Turtle Mountain Reservation in North Dakota. Bobbi has been dancing fancy shawl since she was in tiny tots, traveling throughout the United States and Canada. She has done various performances and presentations at schools, universities, and other organizations.

Bobbi received her bachelor’s degree in Indigenous and American Indian Studies with an
Emphasis in Social Welfare from Haskell Indian Nations University in Lawrence, Kansas in 2015. She is currently employed at the Turtle Mountain Community College in Belcourt, ND working as an Art Instructor. She aspires to further her education by attaining her master’s degree in the near future. Her goal is to work in higher education in administration. Bobbi also is working with other organizations in the Turtle Mountain Community as a supporter in maintaining cultural awareness and lifestyle.